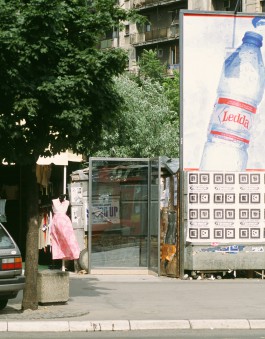 This temporary public sculpture was conceived for Slavija Square in Belgrade, as part of the international Belgrade Summer Festival "Disfunctional Places/Displaced Functionalities" curated by Zoran Erić and Stevan Vuković in 2001. It was placed among the pop-up kiosks that characterized the informal economy of post-war Serbia, and in response to the massive complex of the National Bank—started under Slobodan Milošević but never finished— across the street.

“The artistic intervention comprised of an installation that symbolically reflected the layering of different economies revolving around its site. It was conceived as an exact replica of the facade elements of the National Bank under construction, meaning that artists were required to use exactly the same materials including commissioning the same factory to cut the Italian glass. Even the remaining marble was procured from the building site and used as a base of the installation. As a subtle response to the context, the installation of Annette Weisser and Ingo Vetter also involved formal mimicry of the site environment of kiosks and boutique booths. An important part of the artistic project was a (more or less successful) process of negotiation with all of the agents involved in the socio-spatial economy of the site.” (Zoran Erić, curator) 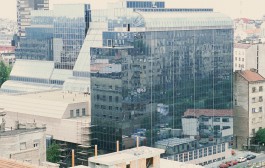 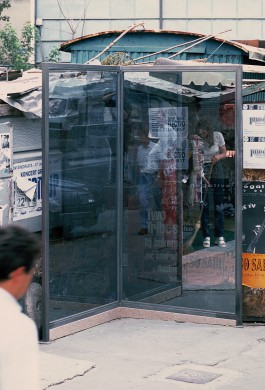